From a Young Halle?

Now that we know each other a bit, I would like to tell you the story of my avatar standing in for me here at “Facade”.

About twenty-five years ago I took an art course in the summer. For a week, some friends took various classes; mine were in photography (where I learned to process black and white photos, and took some very artsy shots with lots of varied depth of field and shading) and sketching. The sketches were done with pencil, charcoal, and conte crayons. No different from most budding art students, it was particularly challenging to capture the human eyes and mouth. For practice, I drew a number of self-portraits of my reflection. 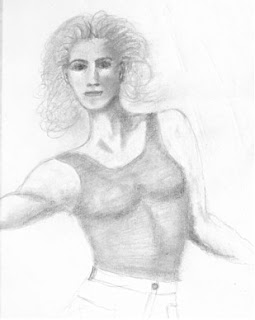 One of the sketches from that time was a drawing of a young woman from the waist up, with curly hair and a rather serious expression.
It and all the rest got put away and pretty much forgotten not long after being produced.
Last year, looking through some stuff, I found the collection and realized that the young woman’s eyes, nose and mouth were mine, from those studies I had done over and over, while the hair and body was that of a woman whose shape and size were not that of my body twenty-five years ago, but not unlike my body now. Unconsciously, I had drawn a self-portrait of Halle at about thirty years of age.
Starting this blog, wanting to give readers an idea whose words they were reading, it made sense to scan and crop my sketch. My intention at that time was to replace it as soon as there was a decent photo of Halle available for general publication, as so many of you have done.
Now comes the true confessions part. There will likely never be a photo of me here, because this pencil sketch has become more important to me than a simple device for readers. I look at that face daily. I take in that attitude, and into those eyes looking into a future she never lived, and she challenges me to aspire to be more than I was yesterday. It must sound very weird, yet I try each day, now, to live up to the expectations that the artist (an earlier me) put into that fictional lady so long ago. He would have denied up and down that this was a self-portrait; it was just the best image he could make at the time.
If you have looked around here, you know that these are letters sent to my younger self. My younger self seems to have reciprocated.
How is it possible that I could create my own role model that far in the past, for a time I never knew would come?
Every one of us is a miracle, you know. Do not underestimate yourself, or the capabilities of the human mind.
at 12:58