Sweetie and I just returned from a ten-day holiday, camping near the waters of Georgian Bay in Central Ontario. For those who have never seen this part of the world, there are hardly words to describe the power of this place where granite meets the water and wind. The land bears the scars of ancient glaciers. Exposed trees clinging to a thin layer of poor soil add a rugged beauty. There is no place like it for meditation.

As a contrast to the bare rocky outcroppings, the place where we camped was a lowland area, heavily forested by tall deciduous trees, only a short walk from the water. A gorgeous sandy beach between the two areas provides a playground and walking area in the sun. 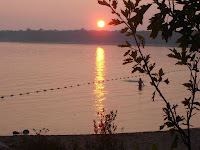 To sum up, this is a heavenly place.

As if you could top the scenery, in the nearby town of Parry Sound a music festival was in it’s final week. We managed to get seats beside the stage for a concert of harp music. The playing was exceptional by three harpists and an orchestra. For me the highlight was a harp concerto by Handel played by a true treasure in the Canadian musical world; Judy Loman. She is a world class player and a teacher of great renown. The beauty of her touch on that most heavenly of instruments had tears rolling down my cheeks.

These were wonderful days as we both forgot the usual (and unusual) concerns that life sends our way.
at 10:55