Everyone has had a splinter. Maybe it was a bit deep or it broke and was in there for a while. Splinters are nasty things. Ignore one and you can get an infection and die from blood poisoning. Mostly they eventually work themselves out and we move on.

If you are reading this blog it is fair to say that at some time and maybe now you would say something is driving you crazy. Like a splinter in your mind (yes, that is from The Matrix and who would understand that idea better than the Wachowskis?) it won't allow you to rest until you find a way to remove it ... but how?

Likely you spend all of your free waking hours researching and, maybe, if you have that resource, you go to therapy. The need to remove that splinter drives people around you crazy, too, because you act like a crazy person most of the time. You lose friends and, maybe, family, but it is a splinter and you have to get that thing out!

Therapy is hard work, but you have to do the work because if you don't you will never know what potential you have. So much of it feels like bullshit, but you trust that somehow it will make you understand yourself better, and that might be the key to getting rid of that thing that is driving you.

Better informed about the cause of the problem, you make choices to make major changes in your life to stop the pain or live with it.

Here is the what if part:

What if you decide to change and after all of the work and the pain of changing, you are then alone and poor but whole - no splinter? If you could go back, would you say to yourself, live with the damned splinter!

There are no guarantees other than the obvious ones. Taxes and death, they say. I had a choice about what my last thought on this earth might be. It could have been "why did I live with that damned splinter all my life?"

Instead, I chose the path that has me thinking "what was it like to have that splinter?" and I expect my last thought will be about something else. Because I have been really lucky, and I did the work and made major changes, my thought will likely include being thankful to have lived this life.
at 14:26 12 of your thoughts

For my non-trans friends who visit, a warning: this post is very definitely on a subject near and dear to our hearts: passing.

I have heard stories that once upon a time, when a trans-woman attempted to do something about that "being stuck in a male body" problem, she was expected to take on a façade of ultra-femininity. On top of that, if she was attracted to women, not men, that was a sure sign that she was really a "he" and, well ... end of story. In other words, once upon a time someone like me was doomed to live her life as a man; which, by no coincidence, is what I did up until the world became a kinder more reasonable place, for people like me, quite recently.

Part of learning how to be a real man so very long ago had to do with how I naturally walked and moved. Around the age of ten, my grandfather took me aside and told me that I used my hands way too much. The same instruction session included, "Point your toes forward and take bigger steps. You look like a GIRL!"  Not coincidentally, from then on, my parents joined in - making fun of the kid who waves her (sorry, his) hands around when talking and walks like a girl. Before long, I was walking in a very manly way while holding my hands at my sides (with the exception of the times I was biting my nails down to the quick).

Happily, I don't seem to have any trouble now with my walking style or use of my hands. Hormones have changed my balance for the better and surgery has definitely helped.

So passing is not an issue, right? Well, my hair is too thin and looks awful, but what woman loves her hair at my age? The real thing about being me is - I'm not a girl, I am a woman - and a woman of a certain age, too. Being really attractive to others is not my goal. It makes me happy to be me - far from ultra-feminine. Looking around at other women my age, what do I see? It turns out that most of them put on little, if any, makeup and wear blue jeans most of the time, even in warm weather. So, should I dress like other women my age? Given that they look like women dressed that way, and I look like a man, that is a silly question and the answer is clearly no. If being like the other women my age isn't a good strategy, then what is? The answer to that sometimes gives me fits. I want others to see me, the way I am inside.

Recently, the videos of Natalie Wynn - CONTRAPOINTS - have captured my attention. In one titled The Aesthetic, she has a discussion with a character of her invention she calls Tabby about the importance of appearance. The Cat Lady is giving off the vibe of a drag queen, but insists that she is a woman who has her own style; why should she fall into stereotype? Here is the sticky bit ... when someone calls you sir, should you get into an argument or fight with them, or should you realize that this has to do with how much effort you are giving to letting others know you are who you say you are? As usual, Natalie explains the issue much better than I, so have a look at the video if you have twenty minutes to spare.

Back to us - women who transitioned later in life. If dressing in blue jeans with no makeup is going to immediately clock me as a man, whereas wearing nail extensions, false eyelashes, mini-skirt, and sky-high heels is going to immediately clock me as a man, then where on the spectrum between should I be? The debate rages on in my head, along with a healthy dose of who am I dressing for anyway? and didn't this whole thing begin with abandoning a façade that was driving me crazy ... so why would I choose to create a new façade just to make others happy now?

At the moment, my choice is to dress in a way that makes me happy and then go a bit farther into femininity. A bit more makeup than I think, a frillier top, or a nicer skirt instead of slacks, or slacks that are sexier than I might think is right. In other words a balancing act; look good, but avoid having those who see me do a double-take.

Feel free to select captions in a language of your choice.. Blogger won't let me make a post with a full transcript of this video.
at 18:02 10 of your thoughts

I realize that many think the world is in big trouble these days, and I have to agree. However, for me personally, it seems a kinder and gentler world than it did for the many decades before. One of the reasons is smiling at me right now, and, no, you can't have her.

If I had transitioned in my twenties, now, in my late sixties, I wouldn't likely be thinking at all about being trans. But just over three years is a relatively small fraction of my life, so, well, I do think about it, and sometimes, frankly, it surprises me in very pleasant ways. 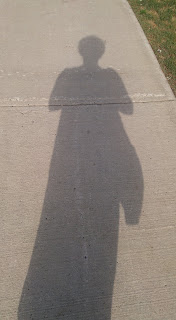 Yesterday morning, as I was walking to the grocery store, watching the world go by, enjoying the light warm breeze, the sun came out. This is what I saw.

I thought it was worth a picture. A silhouette cannot capture my smile, so you will have to take my word for it.

I have kept in touch through texts with some of the group who were recovering together from surgeries almost two years ago. We are all doing fine medically, especially the token man in the group. He has just had another surgery a few weeks back, bringing him one step closer to having the kind of body he has always felt he should have, but couldn't, without help that is. We kidded him in the texts that this winter he will be able to write his name in the snow. I mentioned that a walk in the woods will be a lot more comfortable now. He LOLd* at that and agreed.

Mostly though, anyone who has transitioned will tell you: the best reason to smile has to do with knowing you are who you ought to be - who you should always have been but for an accident of birth and the verdict of a quick glance, followed by gender-stereotyping for life.

Was life so terrible when I could choose to write my name in the snow? Definitely not. But that smile when I see my silhouette reminds me how much better it is when you can be comfortable in your skin - just me, as I've always felt it should be.