Not doing Nothing anymore

Facebook has been good to me, so I won't slam it. However, it can be very annoying sometimes with repetitious views of the same thing - over and over.

Some months ago, someone who knows me very well sent a message with this quote: 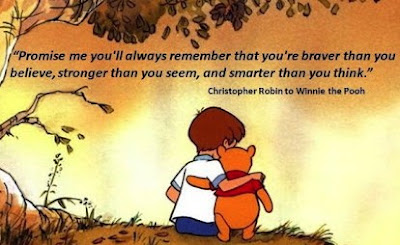 "Promise me you'll always remember that you're braver than you believe, stronger than you seem, and smarter than you think."

As beautiful as it is, somehow it didn't feel like A.A. Milne, but every search I did insisted that indeed it is - until today. Wanting to find out which of Milne's books it was from, I found this article that told me. The author of the article, Pat Morden, did some research and discovered that the words above were not authored by Milne at all, but by some uncredited writer, working for Disney. The illustration above is a Disney creation as well. Now, let's be really clear about something; I do not dislike Disney or the cartoons or the movies. However, as Pat puts it so well, "the Disney piece is ideal for Facebook—sentiment neatly tied up with a bow."

The illustration below (or decoration as it says in the book), is by Ernest H. Shepard and is from The House at Pooh Corner*. I find it equal to the heartfelt words Christopher Robin says to Pooh as he is saying goodbye at the end of the book:


"Then, suddenly again, Christopher Robin, who was still looking at the world, with his chin in his hands, called out “Pooh!”
“Yes?” said Pooh.
“When I'm - when -- Pooh!”
“Yes, Christopher Robin?”
“I’m not going to do Nothing any more.”
“Never again?”
“Well, not so much. They don’t let you.”
Pooh waited for him to go on, but he was silent again.
“Yes, Christopher Robin,” said Pooh helpfully.
“Pooh, when I’m – you know – when I’m not doing Nothing, will you come up here sometimes?”
“Just Me?”
“Yes, Pooh.”
“Will you be here too?”
“Yes Pooh, I will be, really. I promise I will be, Pooh.”
“That’s good,” said Pooh.
“Pooh, promise me you won’t forget about me, ever. Not even when I’m a hundred.”
Pooh thought for a little.
“How old shall I be then?”
“Ninety-nine.”
Pooh nodded.
“I promise,” he said.
Still with his eyes on the world Christopher Robin put out a hand and felt for Pooh’s paw.
“Pooh,” said Christopher Robin earnestly, “if I – if I’m not quite – ” he stopped and tried again – “Pooh, whatever happens, you will understand, won’t you?”
“Understand what?”
“Oh, nothing.” He laughed and jumped to his feet. “Come on!”
“Where?” said Pooh.
“Anywhere,” said Christopher Robin.

So they went off together. But wherever they go, and whatever happens to them on the way, in that enchanted place on the top of the Forest, a little boy and his Bear will always be playing." 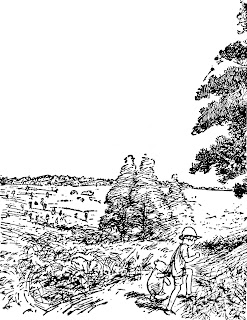