My imagination is excellent. I have loads of empathy. Can those admirable qualities over the years have allowed me to know what it means to be a woman in our world? Not a chance.

I watched with anger and frustration as my wife was pushed aside in her work so that a man, with less seniority, who didn't know the job or do the work as well as she did, could have it. "He has to have this job. He has a family to support." She eventually left that company after a year languishing in the typing pool.

In my heart, I have always been a woman, and yes, I live as a woman. By law, I am a woman; my birth certificate, passport, and driver's license say so. But what do I know of the sorts of hurts and challenges that a woman has faced every day in the world?

It is International Women's Day, 2017. Last month the drawing below by artist Courtney Privett came to my attention. This Huffington Post article gives the explanation of how she came to create it. The drawing is self-explanatory and its title, Nevertheless, she persisted, says so much about what it has meant to grow up female in our society.

I will reproduce the content below so that those who speak a language other than English can see what she wanted her daughters to know of her own life. I also feel a compulsion to absorb all of them more fully. I have heard only a few of these sayings directed at me in the past year. 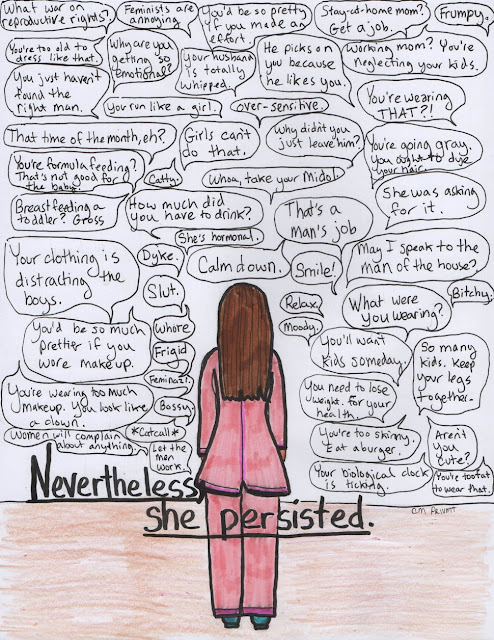